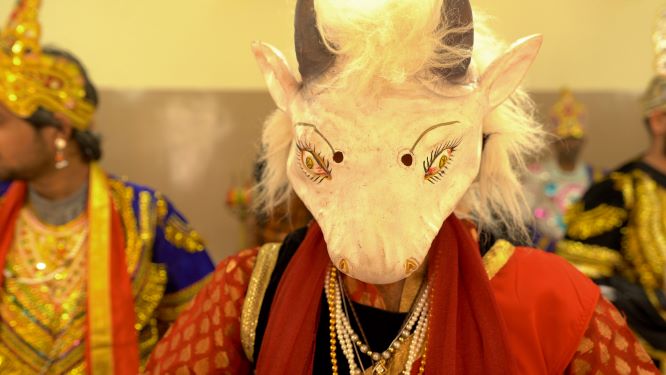 The Churning of the Ocean (Samudra Manthan)

At Kumbh Mela, the world’s largest congregation of religious pilgrims, a troupe of theatre actors stage a play based on an origin myth of Hinduism – the churning of the cosmic ocean. The legend tells of an epic battle between the gods and the demons for an elixir of immortality. The mela (or fair) is celebrated at the site where the elixir was believed to have fallen. Today, millions of Hindu pilgrims gather there to bathe in the holy river over a two-month period.

Kamal Swaroop is a two-time President’s Award and Filmfare Award winning filmmaker, television and radio director, and screenwriter. In 1974, he graduated from the Film and Television Institute of India and even his student works were met with unusual international acclaim. In 1982, he assisted Sir Richard Attenborough in the filming of Gandhi. His Om-Dar-B-Dar (1988) is considered a masterpiece. Swaroop’s career, spanning 42 years, covers a broad range of films. The Battle of Banaras (2015) premiered at Cinema Du Reel, Paris, and screened at Dubai Film Festival, while Atul (2017) – based on the renowned Dadaist artist Atul Dodiya – premiered at the Kochi Biennale. Pushkar Puran (2017) screened at the Montreal World Film Festival, DOK Leipzig, Jio MAMI Mumbai Film Festival with Star, and Edinburgh International Film Festival.