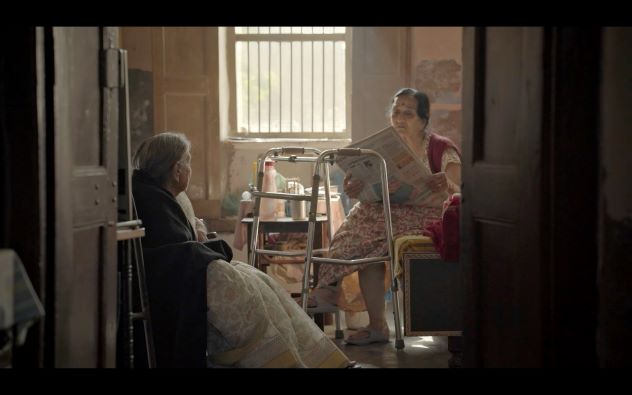 Two widowed sisters, aged 86 and 93, live with their adopted family of domestic help in the village of Lahra, three hours away from India’s capital city. Pulling along on their walkers, the sisters do as they please, paying no heed to anybody’s unsolicited advice. With a rare acceptance of old-age and all that it brings, they spend their time gossiping, watching T.V., soaking in the sun, and bonding with the help. The filmmaker, their niece, visits their home for the first time, bringing us an intensely personal glimpse of their oddball lives filled with courage and camaraderie.

Tanuja Chandra has a B.A. in English Literature from Mumbai, and an M.F.A. in Film Direction and Writing from Temple University, USA. She returned to India and directed the television shows, Mirch Masala and Zameen Aasmaan (1995?). After this, she co-wrote the screenplay and dialogue for Mahesh Bhatt’s films, Zakhm (1998) and Tamanna (1998), both of which won National Awards, and co-wrote Yash Chopra’s Dil Toh Pagal Hai (1997).  After she directed her debut feature Dushman (1998), she went on to direct nationally and internationally acclaimed feature films like Sangharsh (1999), Sur (2002), Zindaggi Rocks (2006), the English language film Hope & A Little Sugar (2006), and most recently Qarib Qarib Singlle (2017). Her short films Silvat (2017), and A Monsoon Date (2018) released on global streaming platforms.  She is also the author of Bijnis Woman (2017), a collection of short stories. She is currently working on film and long format projects, and her next book.